The 1,201-foot  Memorial Bridge is the only Piscataqua River bridge with provisions for pedestrians and bicycles.  The first truss bridge of its kind, it replaced a bridge built between 1920 and 1923, which closed in 2011 due to deterioration.

When the bridge opened in 2013, former Portsmouth Mayor Eileen Foley cut the red ribbon —  90 years after she had performed the same honors for the original span. 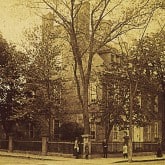