There’s lots to do over Labor Day Weekend. Here are some of the highlights. The Art ‘Round Town gallery walk returns to downtown Portsmouth on Friday from 5-8 p.m., and 3S Artspace will take the opportunity to introduce two new exhibits. “Telling Stories” features geometric sculptures by Lynne Barr. “Becoming Grey” showcases Nancy Grace Horton’s portrayals of grey-haired women through photography, video, and audio interviews. Both artists will be on hand for the opening reception on Friday night.

New exhibits at the NHAA The New Hampshire Art Association will unveil four new shows at the Robert Lincoln Levy Gallery in Portsmouth on Friday from 5-8 p.m. “The Shop” displays Carol Van Loon’s photos of European Auto of Rye. “Circle of Life” is a member exhibition and sale. “And What a Time it’s Been” features paintings created by JoAnn Portalupi and Shawn Pelech during the pandemic. “Landscapes — Real and Imagined” shows paintings by Peter Anderson.

Two shows at The Stone Church 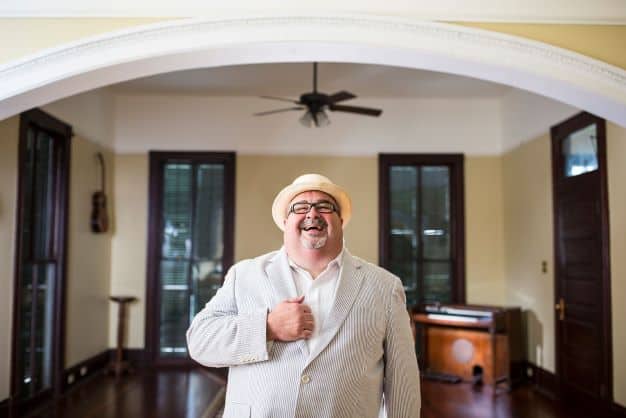 The Stone Church has two stellar concerts booked this weekend. First up is the extraordinary New Orleans-style pianist John “Papa” Gros, who performs with his full band on Friday from 6-9 p.m. ($30). Trust us — you owe this guy a listen! Taking the stage on Sunday from 7-9 p.m. is Once an Outlaw, a supergroup featuring past and present members of the Outlaws, the Marshall Tucker Band, the Dickey Betts Band, and others ($30). Get tickets here.

El Malo at The Grant Lot Local label Burst & Bloom Records continues its Grant Lot Summer Outdoor Concert Series with a performance by El Malo on Friday from 7-9 p.m. The Maine-based musical collective specializes in the sounds of Latin dance music blended with jazz, hip-hop, funk, soul, and progressive rock. They’ll perform behind the Grant Building in Bath, Maine, about an hour and a half from Portsmouth. Tickets are $8.50. Learn more here.

Elsa Cross at The Press Room Hometown hero Elsa Cross returns to her old stomping grounds for a show at The Press Room in Portsmouth on Friday at 9 p.m. Now established in Austin, Texas, Cross recently released “Kicking Love,” her first album since 2014. Like her past work, the new record showcases her punk-edged alt-country and rockabilly sound. She’ll be joined in Portsmouth by punk-seasoned local favorite Lenny Lashley. Tickets are $15-$20. Learn more here. Three beloved local bands will take the stage at Prescott Park in Portsmouth during the Saltwater Roots Festival on Saturday from 6-10 p.m. Mountain-rock group the Kenny Brothers Band, soulful rock band Marble Eyes, and roots-rockers The Midnight Wrens share the bill for the event, part of the Prescott Park Arts Festival’s River House Restaurant Concert Series. There is a suggested donation at the gates. For more information, click here. The Music Hall in Portsmouth will screen ocean-loving films focused on adventure, the aquatic environment, and inspirational stories when the One Ocean Film Tour comes to town on Saturday from 7-9:15 p.m. Founded in 2020, the tour raises awareness about ocean conservation with films on topics like surfing, crimes on the high seas, and a physically-challenged sailor circumnavigating the world. Tickets are $12-$15. Learn more here. Grammy-nominated indie-folk act Hiss Golden Messenger — the stage moniker of singer-songwriter M.C. Taylor — will offer a pair of highly-anticipated outdoor performances at The Word Barn Meadow in Exeter on Sunday. Fresh off the release of his critically-acclaimed 10th studio album, “Quietly Blowing It,” Taylor will play an early show from 4-5:30 p.m. and a late show from 7-8:30 p.m. Tickets are $35 (warning — low ticket count!). Get them here.

Hard to believe local band Truffle has been at it for three and a half decades now, but the New Orleans-flavored outfit will celebrate its 35th anniversary with an outdoor show on the patio at Grill 28 in Portsmouth on Sunday from 5-8:30 p.m. The quintet formed in 1986 and has been spreading its soulful sound around the region ever since. They’ll be joined at Pease by The Honey Bees, John Woodman, and Jim Dumais on sound. Learn more here.