Portsmouth Naval Shipyard was founded by the U.S. Congress on June 12, 1800, as the first of six public shipyards.

In 1905, the Treaty of Portsmouth was signed here, ending the Russo-Japanese War. During World War II, the shipyard employed 24,000 workers and produced a record numbers of submarines.

Today the shipyard’s focus is the overhaul of nuclear submarines. The large, white fortress-like building at the eastern end of the shipyard, a naval prison, was closed in 1974 and remains empty. 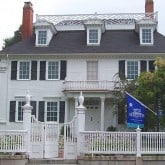