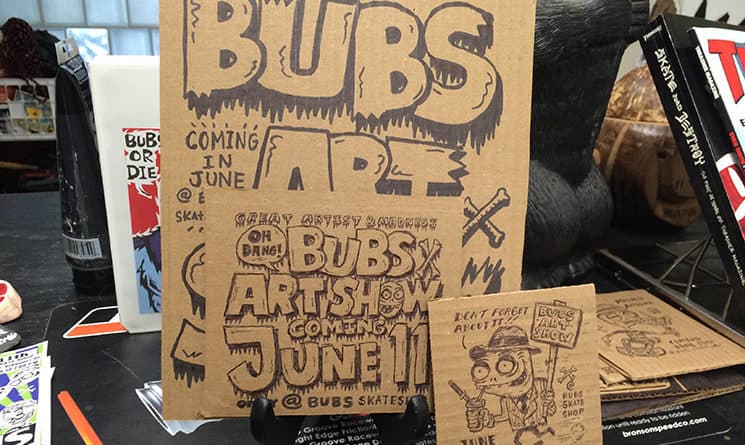 Take a look around Bubs Skateboard Shop in Newmarket, and it’s hard to miss the artwork of owner Stephen Moran. From across the room, the shop’s counter is piled with what appears to be stacks of small cardboard squares. But, upon closer inspection, each square is adorned with detailed ink drawings.

Moran, known to his friends and customers as “Southie,” laughed as he explained the source of his chosen medium — recycled boxes from his second job managing the produce section of the Newberry Farms Market.

“I had this show coming up at Crackskull’s (Coffee and Books), and I was so broke,” Moran said. “I didn’t know where I was going to get supplies, and then I thought, ‘I have a ton of these boxes.’”

This weekend, Moran will be showing his artwork and that of about a dozen other artists at Bubs. The one-night show opens at 7 p.m. on Saturday night and will also include music and snacks. Bubs opened on Main Street about seven months ago. Moran said he hadn’t necessarily planned on opening a skate shop when he moved to Newmarket a year ago, but when he saw the empty storefront, things just fell into place.

“I kept walking by and seeing the ‘for rent’ sign, and I just kept getting this itch to call,” he said, “so I did.”

The shop sells skateboard gear and apparel, both of its own design and from other local companies. For Moran, an art show seemed like a natural fit.

“Someone had mentioned to me, like, ‘Hey, you should have an art show,’ and I thought, ‘Yeah.’” he said.

Many of the featured artists are friends and old skateboarding partners of Moran’s, including Chris “TallBoy” Coulon, an artist based out of Philadelphia who sent up several screen prints for the show.

“I grew up skateboarding and hanging around The Coliseum Skateboard Superstore in Melrose, Mass.,” Coulon said. “Southie was a founding father and chief wedgie-giver of that family, so I used to look up to him as a skateboarder and fear him as a wedgie-giver.” Coulon, whose company Night Watch Studios specializes in “low-brow art pins, zines, apparel, and other merchandise,” said he would describe his work as “bold, colorful, and fun art best represented in screen-printed form.” He said he is excited to participate in the show in Newmarket.

“I’m honored to be part of a continued tradition of skateboarding and art,” he said.

For Moran, the upcoming show at Bubs is a chance to celebrate art and put some of his own work on display. He motioned toward the murals around the shop and the stacks of hand-drawn artwork on the counter. A mural in Bubs Skateboard Shop. photo by Abigael Sleeper