The Blue Buddha Band plays a CD release show at The Dance Hall on Friday.

The first weekend of November is filled with art, music, storytelling, and more. Among the four new shows the New Hampshire Art Association is unveiling during Art ‘Round Town on Friday is the 23rd annual Joan L. Dunfey Open-Juried Exhibition. This year’s theme is “Magnificence of the Mundane.” The opening reception takes place at the Robert Lincoln Levy Gallery in Portsmouth from 5-8 p.m. Learn more here.

Music and words at The Word Barn Acclaimed Irish artist Mick Flannery kicks off a busy weekend at The Word Barn in Exeter with a concert on Friday from 7-8:30 p.m. ($20). Local favorites the Soggy Po’ Boys play their first indoor show at the venue on Saturday from 7-9 p.m. ($25). Sunday brings “A Journey to the White Mountains,” a performance that combines writer Howard Mansfield’s words with landscape-inspired music by composer Ben Cosgrove, from 4-5:30 p.m. ($16).  Learn more here.

The Blue Buddha Band at The Dance Hall One former Congressman, two mad scientists, and a jazz drummer join forces in The Blue Buddha Band. The local retro-rock and roots group will play a CD release show for their new album, “Turn This Ship Around,” at The Dance Hall in Kittery on Friday from 7:30-9 p.m. (album sales support the venue). Tickets are $15. Learn more here.

The Midnight Wrens at The Stone Church 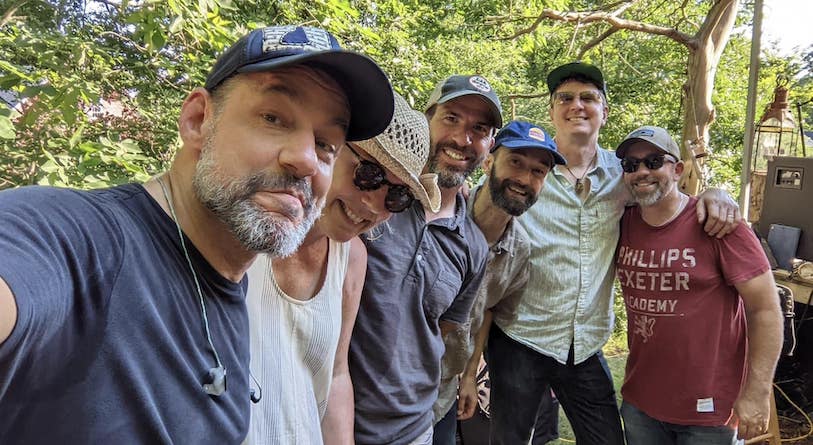 Local supergroup The Midnight Wrens got even superer with the recent addition of drummer Andy Herrick (Assembly of Dust) and bassist Jon Hawes (Percy Hill). The roots-rock band will introduce its new lineup at a show with guest Sundew at The Stone Church in Newmarket on Friday from 7:30-11 p.m. Tickets are $15-$20. Learn more here. Sarah Shook & the Disarmers at 3S Always passionate and sometimes profane, Sarah Shook brings fresh attitude to the modern country music scene. The North Carolina-based singer-songwriter and her band the Disarmers, who released a new album earlier this year, will perform at 3S Artspace in Portsmouth on Saturday from 8-11 p.m. Tickets are $15-$18. Learn more here.

Local triple-bill at The Press Room The Press Room in Portsmouth will present an all-star lineup of regional acts on Saturday at 8 p.m. Headliner the Kate Redgate Band, playing their only Seacoast gig of the fall, will preview some new tunes from their forthcoming album, due out in the spring. Special guests Tiger Saw and Tristan Omand open. Tickets are $20. Learn more here. Craft Fix offers an opportunity to get your holiday shopping put to bed early while supporting local artists and artisans. A variety of original crafts, artworks, and other unique handmade gifts will be available at the annual event, held in the parking lot outside Buoy and The Black Birch in Kittery on Sunday from 10 a.m. to 3 p.m. Learn more here. Ezra Cohen & The Big City Band returns to the Button Factory Stage to headline a special concert at WSCA Portsmouth Community Radio on Sunday from 7-11 p.m. Also on the bill are local acts Hello Shark, Liza of Planet Parlor, and Megan from Work. Tickets are $10. (And Anita Velveeta headlines at WSCA on Monday night!) Learn more here.

Tom Paxton & The Don Juans at the Lounge