Originally called the Rockingham Hotel, the State Street building was once owned by Frank Jones, Portsmouth’s 19th-century millionaire entrepreneur and celebrated ale-maker. After Jones’ 1884 renovations, the hotel was described as “the most elegant and superbly furnished establishment … outside of Boston.”

The building remained a business until 1973 when it was converted to condominiums.

Note the lions, which Jones adopted as his personal symbol, the terra cotta sculptures of the Four Seasons of Man, and the two portraits busts depicting Frank Jones and Woodbury Langdon, who once owned a mansion on the site. 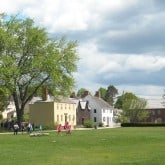