The ornate carvings in mantels and moldings of the Governor John Langdon House are more than just shows of prosperity and elegant taste; the white pine is a reminder of war and peace, and stories about the founding of a nation.

In colonial times, eastern white pine was sought for the mansions of merchants as well as their ship masts, and England’s claim to the largest of these trees was one of the grievances leading up to the Revolutionary War. In contrast, some Native Americans considered white pines the Tree of Peace, a sign of unity where weapons were left behind in literal acts of burying the hatchet.

Regional sculptor Amanda Sisk is a direct descendent of Revolutionary War heroes and has Native American heritage, and her new sculpture will hold both personal and historical meaning.

“I’m reading about these two different but overlapping roles of the eastern white pine in our nation’s history and in Langdon’s life and career with personal interest,” Sisk said. “I lived and worked in Europe for some time and had not contemplated my American roots prior to this project.” Decorative carvings made from white pine in the historic Langdon House. courtesy of Historic New England

Sisk is the first-ever artist-in-residence at the Langdon House in Portsmouth. Her studio on the historic site is open to the public on weekends in August, and she’ll host several workshops on different sculpting techniques.

Visitors can meet the artist during Art ’Round Town events on Aug. 5 and Sept. 2, from 5 to 8 p.m. They can also see her work in progress during visiting hours, Fridays through Sundays, Aug. 5 to 28.

Sisk is an award-winning sculptor specializing in bas-relief. This technique results in design elements that are slightly raised from the background. She begins by forming a large slab of clay, then sketches a scene and works by adding and carving clay away. A mold is made to transition the sculpture into something more permanent.  The new site-specific work will be made of resin with a white pine frame.

Langdon, who died in 1819, is considered one of the founding fathers of the United States. He was one of the first two U.S. senators from New Hampshire and was the state’s second governor. The kind of pine used in Langdon’s house and the ships he built was of strategic importance to the area. It was the preeminent material for architectural joiner’s work and it was exported, strengthening the local economy, Sisk said.

She’s planning to create a bas-relief portrait of Langdon as a young senator in his 30s. Without a source to refer to directly, it’ll be a challenge for a representational artist. But she’s interested in the time around the establishment of the U.S. Navy. Amanda Sisk’s preliminary sketch of her John Langdon portrait. courtesy of the artist

Sisk said pine trees were behind one of the first American rebellions, though the same trees had been a symbol of unification among Native Americans. Some say the founding fathers acknowledged this and incorporated symbolic Native American imagery, including the eagle that guarded the trees, into our government.

Sisk says she relates to her Native American ancestry and feels a connection to the land. Scientists recognize a certain bacteria in the soil that elevates mood, and she feels it when working with clay, she said.

“The instant my fingers hit clay, it makes sense,” Sisk said. “It’s just the artist and the clay. It’s primal and direct, and something about that really appeals to me.”

She was classically trained, learning to sculpt the same way artists did in the 1800s. Despite this, and previous experience working at a historic site, her work hasn’t included historical references before. She is known for true-to-life portraiture and figurative work, and is also inspired by nature. Amanda Sisk at work on a sculpture. courtesy photo

It’s fitting that the white pine has become a focus of her project, since she spends much of her time in the woods. Sisk said she feels a kinship to the woodworkers behind the scenes who contributed to the lasting aesthetics of the Langdon House. She’s an extremely private person, but finds it rewarding and fulfilling when other people react to her work at open studio events.

“Artists are not meant to create in a void,” she said.

The completed work will be auctioned in September to help raise awareness and funds to support the artist-in-residence program.

Admission inside the Langdon House includes access to the gallery and a tour of the house. The current exhibition is “Touring New England, 1820-1970,” featuring images of travel and tourism revealing the appeal of the area. It runs through Oct. 16. 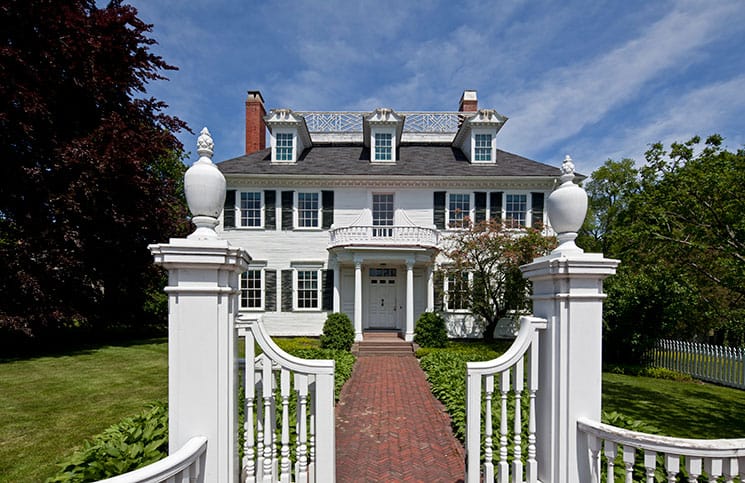