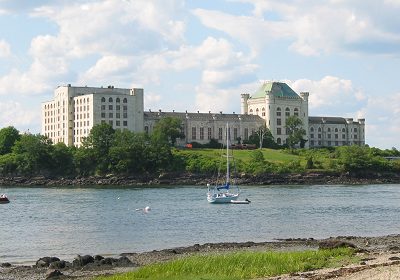 The mysterious and massive building across the river from Portsmouth is a U.S. Navy prison, abandoned since the 1970s as too expensive to rebuild or to tear down.

Built in the early 1900s, the prison on Seavey Island was a notorious and feared holding spot for American sailors. Up to 3,000 were housed there during World War II. Spanish prisoners-of-war also were kept there during the Spanish-American War, and scenes from the movie “The Last Detail,” starring Jack Nicholson were filmed there.

The prison is not open the public, and it on the grounds of a restricted federal facility, the Portsmouth Naval Shipyard.